skip to main | skip to sidebar

she thought that she was left alone,

until "she" came into her picture,

it was fast, REAL fast,

she thought was love,

a second chance for love,

but she did held back, once a while,

she did not pull the string too hard,

nor let it too loose,

when the time comes,

"she" asked her to become a part of "her" life,

in that second, she thought,

"why not give myself a chance?"

so she gave herself a chance and to "her" as well,

but deep down her heart, there's a little fire left burning for someone,

the flame is so weak, yet it's still flaming,

for that particular woman in her life.

lately, the woman came into her picture as well,

nothing much, but they do have little sparks,

both of them knew it but did not mentioned it out,

she wanted to have her back into her life so badly,

yet, she still have "her" in her life,

so, at one point, she knew that she can't get the woman of her dreams,

the woman that kept the burning flame alive till now,

stopped lying to herself,

stopped lying to the woman of her life.

and she stopped everything.

she loved the woman so badly till ...

she rather keep all the unhappy and dreadful feelings,

but in the other hand,

she stopped making "her" suffer by letting "her" go..

and she knew that "she" hurts very badly which might not ever,

have a chance to be friends,

cause she knew she lied too much to "her"..

wonders how a story would end without lies?

The blood runs through my veins 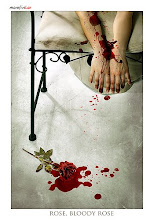